Last Friday after work, Kirsten and I bombed up to Gold Bar, WA to check out some granite goodies. Being slightly over 3hrs in driving time (the rough equivalent to driving to Smith), we were amped on the closest "Legit" bouldering area.

The Central Washington Bouldering Guide by Kelly Sheridan explictly warns climbers from camping on Reiter Road, and has beta to USFS campgrounds. We didn't find any of the campsites, saw the access road to The Forest, Sancutary, and Clearcut blocked, and ended up camping in the parking lot for the Index Lower Wall.

At about 1am, the whole parking lot is illuminated and gets mechanically deafening. I figure some locals are spot-lighting deer with some homemade automobile. Then I can't hear anything. The lights become brighter. My heart starts racing, and I realize that we've set up the tent roughly 10 yards away from the train tracks that parallels US Highway 2. HOLY F*CK! So loud and bright every two hrs till daylight invades.

After coffee and destroying Kirsten in Scrabble, we drive up the road (again) to check out the 3 main areas. Lo and behold, the gate is locked. What would be a quick approach suddenly turns into a 3 mile death march, while leaving Kirsten's car illegally parked on a shady road. In a rare example of good judgement, we decide against it. Instead we go further up Reiter Road to check out what the guidebook calls "The Best Boulder in America", the Five Star Boulder. Maaayyybbeeee because it's early August and hot as balls, or maybe because the other areas are closed, or maybe because Reiter Road is closed and we trespassed to get there, but this supposedly awesome pebble is covered in cobwebs, moss, and very little chalk. Ross Bongo looks lame. Ground Zero=foolish dumbness. Ebriosity and Sobrioty are silly contrivances. Without warming up we go back to the car and drive another hour to Leavenworth.


What I'm slowly learning about Leavenworth is that there are multiple climbing areas. Like Tumwater Canyon, home to a shitton of rad problems with a much different vibe than Icicle. Then there's areas in Icicle that I still haven't checked out. AND THEN there' the Mountain Home sector. Piled on top of the printed problems from about 10 years ago, there is all the new stuff and amble room for FAs. WOW! I'd go out on a limb and say Leavenworth has the potential and accessibilty of Joe's. Though still far too warm to climb anything "hard" (it was 95 on saturday), it was rad to see and climb on so much new stuff. I'm getting way way WAY amped for fall conditions in October and November. In the mean time, more greasy basalt ropes and training like a mofo at The Circuit. 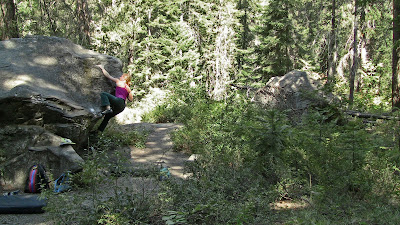 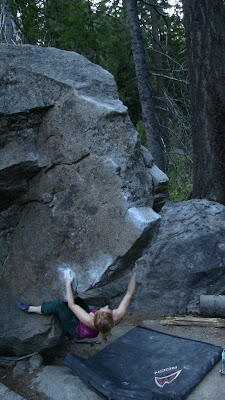 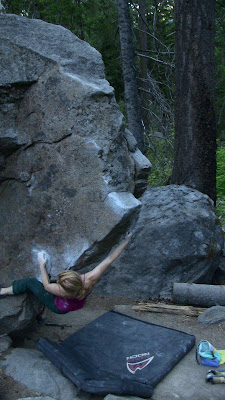 Getting shut down on The Hueco Crimper 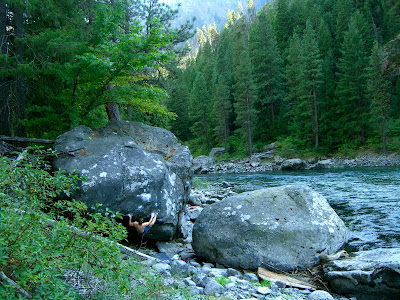 Approach to da beach. No photoshop involved, thank you very much. 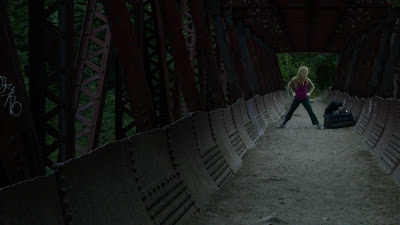 Approach to Swiftwater, which is still smoldering. 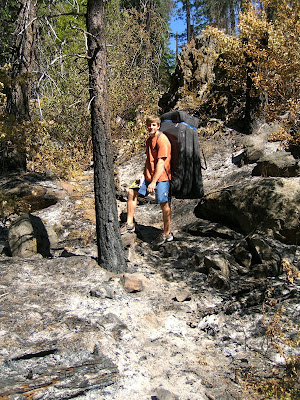 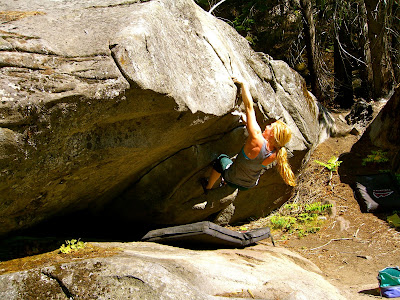 The drive back to PDX thru the scab-lands of Central Washington. Photo by Kirsten 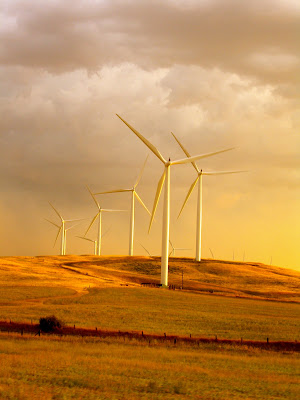 and video that highlights how shitty i've become at climbing outside/footwork. There were far more recorded instances of myself looking like a Uber Gym Rat Retard, but they have been omitted in an attempt to save some face.

Friday afternoon I packed the car, picked Kirsten up from work, and we headed north to the Bavarian Boulder Oasis in Central Washington; LEAVENWORTH! My only other experience with Lworth was a short, 3 day stint last November that involved no sending, shitty weather, and a whole lot of shotgunning PBRs. With sticky granite fermenting in my mind, the drive seemed to last forever.


As soon as we pulled onto Icicle Canyon we were shocked at how many cars were parked on the side of the road and how EVERY SINGLE campground was full! WTF?! With intentions of crushing pebbles late into that night taking a massive backseat to just finding a place for the car, we decided on the Forestland parking lot. Though not scenic, it provided a little bit of privacy as we were the first car there.

Turned out the parking lot wasn't such an original idea, as cars kept pulling in deep into the night. The last group being 5-7 wasted 17-19 year olds who rolled in at 4:00 am totally oblivious to the other tents up. About 15 minutes later I got out, and politely asked them to keep it down a bit. They acknowledged me, and they quite up for 5 mins. However, at ~4:30, what sounded like a Roman sexfest took place less than 10 yards away from our tent. Kirsten turns to me, "Who the fuck are these people and where did they come from?" Good question. Maybe Wenatchee? Sexing ensues for another 10 mins with audible moans and grunts. Then talking. Then a couple mins later more of the same. At this point dawn is creeping into the canyon and Kirsten screams, "Shut the FUCK up!" Giggles from our neighbors then quite. OMG! We drove all this way for THIS?! Silence. ~30 mins latter a hear a bass Bumping. Like, bad MTV music video hyrdolics bumping. Enough is enough, I say to myself. Once again, I get out and walk over to the Monster Energy decaled truck and knock on the window. MORE TEENAGERS HAVING SEX!!! TO EMINEM AND DR DRE, NO LESS!!!!! I ask him if he knows what time it is or if he sees other people trying to sleep. He says sorry and turns off the car. Back to my tent I go to shoot death arrows at these fuckers ruining the ONE bouldering trip i've been on in a damn long time.

6:30 am. Engines are roaring and the lil shits are gone, but not before screaming "Thanks. Hope you slept well" and peeling out, back to white trash land, before their high school football practice starts.

By 9am we've eaten breakfast, looked over the guidebook, and played a game of scrabble ( do believe i won). We tromp up to to Sunny and Steep, a project of kirsten's from last November. She sends in about 15 mins. gotta love it when projects from times past turn into warm-ups! Truly the ultimate sign of progression. I oogle hard things that i want to try someday when i'm older. Having seen a recent video of Pecktoria's trip, i was interested in trying The Shield. I couldn't establish on the first move last November, and was pleasantly surprised when i was able to tickle the sidepull at 9 ft. Progress! We peaced out of Forestland and went to check out other areas and throw our respective meat at as many v3s and 4s as our skin would allow. I also started working on The Sail, a problem I had dillusionally convinced myself I could do. Welp, turns out youtube vids of strong dudes pissing on v9s are misleading= i couldn't do the first move. A project for next time.

I didn't have any super projs or real expectations as my finger is still not quite right, and i feel as though i'm just getting back into climbing shape. So the rest of the trip we continued to try out as many areas as we could, sometimes only climbing for 5 mins before moving onto the next one, sometimes doing every problem on the boulder ( or trying to). In my bouldering experience I find that checking out as many different problems and areas in a short amount of time to be the 2nd most beneficial way for brewing psych. You see different settings, landings, holds, heights, what looks popular, what looks dumpy, good warmups for other trips etc etc. *Note: The first way for brewing psych is coming agonizingly close on a project and not being able to do it due to weather/skin/timeline constraints and having to drive home, replaying your shortcomings until next time.

Overall (sat morning aside) it was an absolutely awesome weekend enjoying the sun, an actual bouldering destination, and getting way amped on climbing outside again. We climbed alot, so much so that yesterday was entirely devoted to growing skin and not doing anything active at all. My lower back and shoulders are STILL sore as I write this!!!!! YES! . Here are some pictures and a video of the weekend. Definately more trips to Leavenworth in the future, though we might wait till the weather/tourists/fuckers cool down to return. Enjoy! 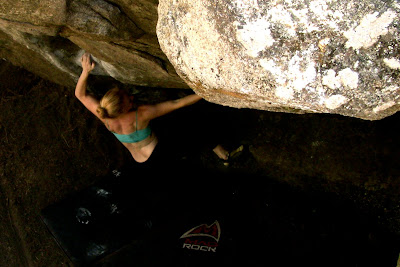 Taking a break on Feel the Pinch 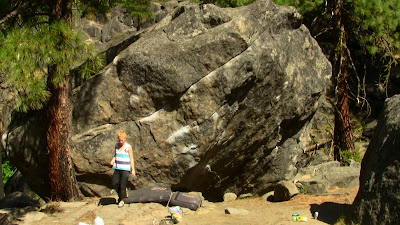 Kirsten loves her new Quantums . So much so that they occupy their own stool in our living room as a decorative centerpiece. 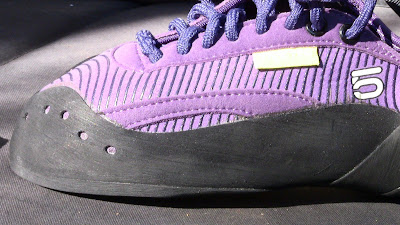 Karma for attempting to take a cheesy self timed photo of ourselves.... 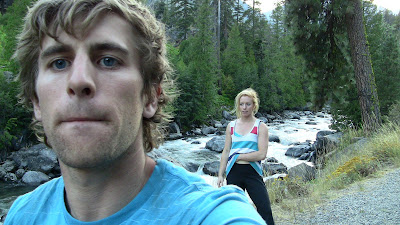 and the video. I formatted it in 1080, lemme know if its even worth it for youtube (~2gigs to make and like 3 hrs to upload). Thanks

Jesse Spaulding is doing way cool things these days. Like making an "Octocopter" (think remote controlled helicopter...cept with 8 propellers) AND mounting a HD video camera on it. Truly could be the future of mind boggling footage for climbing porn....Take a look.

so i know it seems like i'm just re-posting random/weird youtube videos i've found and i'm polluting your climbing-leisure-spray-reading, but humor me one last time. my sister found this, and it'll make you laugh. Unless you're a Bollywood extra and you do this for your livlihood


PS- the music is way better than any Phish 80s jammy bullshit (SCOTTY!).

Posted by mancub at 9:18 AM No comments:

Hot damn! Where did the summer go? Certainly hasnt been spent developing virgin granite blocs in the Rockies, thats for damn sure. Enfact, this past weekend was the SECOND day of outside climbing since May.

The job search/getting to know portland/hating on hipster gym rats at the Circuit and weekend excursions to Mt Hood have sucked my freetime and energy out from the summer. It's a vicious cycle of being unemployed; i have a bunch of downtime, but with no climbing partners or knowledge of the crags. Also, I don't have two pennies to rub together to buy any gas. Shucks

BUT this weekend kirsten and i DID finally get out! A cool free-standing basalt (suprise. suprise) dome hidden within the overgrown canopy of trees at the base of Hood. French's Dome is split in half between super slabby 5.8s and then gently overhanging 5.12s with not much inbetween. The climbing is very similar in feel and nature of holds to Alberton (slippery and rounded), though the pump is significanly more unrelenting like Deep Creek. Or i'm just really out of shape, which is most likely.


The view of Hood from the parking area. Not to shabby.. 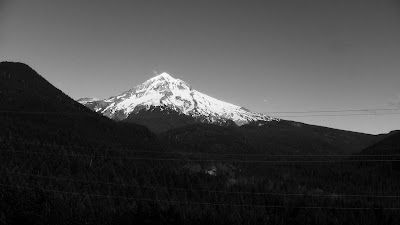 Here our new friend Eric floats up China Man 11.b. 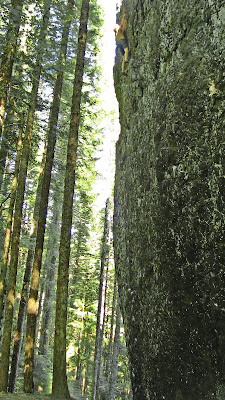 We both managed to get up it, which was a nice lil treat as we hadn't climbed ropes since i tried to do Flying Time in may (in prime croissant eating shape), going bolt to bolt while kirsten was getting smeared against the belay ledge getting her hair caught in the grigri. SO it was a giant success to scamber along chossy basalt this weekend! yay ropes.

my eyes are constantly pealed for the latest and greatest lil basalt pebbles i can find, and i've seen some promise. But nothing compared to the goods i keep ooggling in internetland. bastards.....

on the hike to Tomanawas Falls (note kirsten for scale) 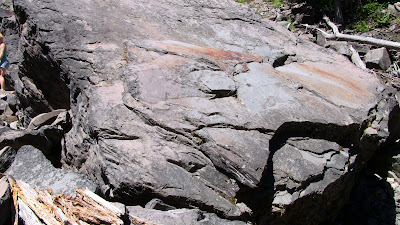 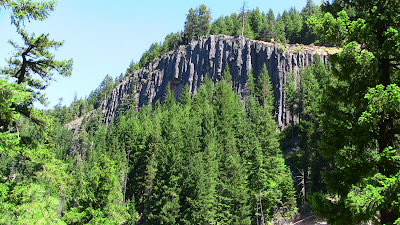 Rainforests. Not condusive to bouldering 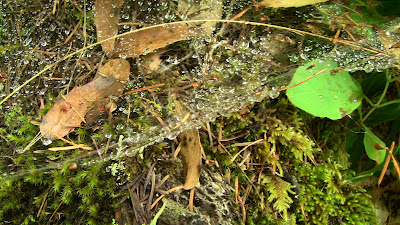 Stand a lone bldr at the base of Hood's snowline.. 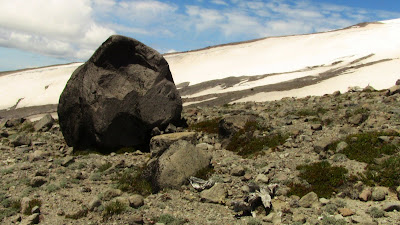